Aurora Rising is a stellar start to another amazing adventure in space with Kaufman and Kristoff at the helm!

I received an eARC copy of this book via NetGalley in exchange for an honest review. This does not affect my opinion of the book or the content of my review.

“If your squad was hard to find, or you’re still looking, then this one is for you.”

Friends, this book is such a damn treat that even the dedication has me weak in the knees. Aurora Rising is one of my most anticipated releases of 2019 and I nearly had a coronary when my request on NetGalley was approved. After fangirling over the Illuminae Files intensely, I had a lot of expectations for this book and I am happy to say that this was the fast-paced, character-driven adventure that I was looking for. This book has it all: political intrigue, an adventure through space, and a precious found family made up of a ragtag group of misfits.

“A billion stars are waiting to greet me […] For a brief second, all the Milky Way is silence.”

Aurora Rising is told in the alternating first-person perspectives of our six main characters. That’s right, there are six or seven POVs in this book, and if you’ve read my reviews for awhile you know that I typically struggle with multiple POV narratives. I am so pleased to say that I didn’t have a difficult time at all keeping track of the action, story, or characters because each POV has a distinct voice and the narrative flows easily. Which is honestly masterful.

The humor and writing style for Kaufman and Kristoff books just feels like home for me and it was so fantastic to dive into a new space world of their making. Honestly the way that this book opens up is so darn clever and self-aware, and I was gripped instantly. The downside of this was that I felt a little jarred on the worldbuilding front: I was sucked in based on the characters and Tyler’s predicament but had a lot of questions about what is going on. Which definitely appears to be the point because the information does come once the pressure and high stakes situation is resolved, doled out slowly.

This may not be a problem for every reader, but I am one that likes to dig into the nitty gritty details and understand everything, which is why worldbuilding is so important to me as a reader. I found myself wanting to know more about the world, their traditions, & history and being confused because there were a lot of terms specific to this world that were used long before an explanation came. For example, the uniglass was mentioned a number of times but it wasn’t until chapter 5 (14%) that we got a description of what the technology does (it’s cool as hell by the way, I want one). That being said, the narrative and action is so engrossing that I was captivated from the first page and completely devoured what we were given.

“Once we walked the dark between the stars, unequaled. What have we become?”

This is a character driven and action-packed story, much like the Illuminae Files. I found that the worldbuilding is secondary to the characters and most that we learn about the intricate worlds of the galaxy in 2380 is shared in relation to our main characters and the people that they meet. There are many planets and alien species that the humans, referred to as Terrans, have encountered and we as the reader experience this information as our outsider Aurora O’Malley encounters it. Which I love as a storytelling device because it makes the exposition feel authentic and not info-dumpy as there is a reason to explain everything within the narrative. With the addition of her uniglass Magellan, she is able to research the history to find out what happened over the last 200 years and I enjoyed the little Magellan briefings interspersed throughout the book for additional worldbuilding. 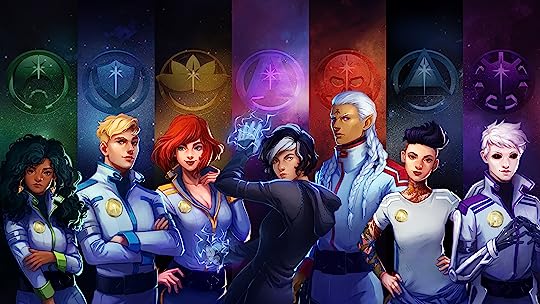 Our squad, artwork by @kiranight_art and available on Kristoff’s website

Our ragtag group of misfits known as Squad 312 is ultimate squad goals. I absolutely love every single one of these characters with all of my heart and the path from dysfunctional to found family made my heart grow three sizes.

Zila Madran: Brains is freaking hilarious and so misunderstood. She’s a quiet and quirky scientist with tons of knowledge, even if she doesn’t get all of the rules of society like “don’t shoot people with your disrupter pistol.”

Tyler Jones: Alpha is a total Golden Boy that until now has always followed the rules.

Scarlett Jones: Face is Tyler’s twin sister fluent in her own brand of sarcasm (“scarcasm”) as well as many other languages. Which is helpful as a diplomat.

Aurora “Auri” O’Malley is our girl out of time.

Cat “Zero” Brannock: Ace is a badass pilot with tattoos that gives me so many Kara Thrace vibes. She’s the childhood friend of Scarlett and Tyler and is totally not in love with Tyler.

Finian de Kerran de Seel: Gearhead is a bisexual Betraskan (alien) tech-whiz that can tinker with anything. He’s disabled and has to wear an exosuit but has sarcasm and jokes for days.

If you love AIDAN from the Illuminae Files, you will no doubt enjoy Magellan! He’s the smart aleck uniglass that Tyler gives to Auri that likes to chime in at inopportune times with his knowledge and I love him.

“‘This thing may be smarter than I am,’ I murmur.
‘Aw, don’t feel bad, boss. You’re only human.’
‘I wasn’t talking to you.’
[…]
‘I’m seventeen times smarter than him. And three times better looking. You should be talking to me.’
‘Silent mode,’ Tyler orders. The uniglass falls quiet.”

I don’t have many legs to stand on with this, but Bex demanded that I include my comment about Aurora Rising being like Dragon Age in space… without dragons in my review. Okay this is largely because they say “Maker’s Breath,” but I also kind of saw similarities between Kal and Sten from DA:O and it made me giggle. This was not helped by the fact that there was a “such as they are” response to questions. Now I want to play those games again. But I digress, one of the things I love about Kaufman and Kristoff’s books are the Easter eggs and references they leave: they are a damn treasure.

In addition to our cast of characters, I absolutely loved the attention to detail when it comes to the technology and science, even though it took some time for it to be explained in the midst of the life-and-death opening. From the Fold that makes their space travel more efficient to the uniglass, it felt like a world within our human possibility but appropriate for a couple hundred years in the future.

Aurora Rising is a stellar start to another amazing adventure in space with Kaufman and Kristoff at the helm! They are incredibly talented in not only creating lovable and three-dimensional characters you fall in love with, but also in crafting a beautifully written and quotable story. While I was left wanting for a bit more worldbuilding, this book is well-plotted and action-packed without any dull moments. This book is funny and heart-breaking. I loved reading this book and I will be counting down the seconds until I can continue with my favorite squad!

🤝 Buddy read with the lovely Bex, and you can read her review here! ❤

Many thanks to Random House Kids for sending me an eARC via NetGalley for my honest review!

From the internationally bestselling authors of THE ILLUMINAE FILES comes an epic new science fiction adventure.

The year is 2380, and the graduating cadets of Aurora Academy are being assigned their first missions. Star pupil Tyler Jones is ready to recruit the squad of his dreams, but his own boneheaded heroism sees him stuck with the dregs nobody else in the Academy would touch…

A cocky diplomat with a black belt in sarcasm
A sociopath scientist with a fondness for shooting her bunkmates
A smart-ass techwiz with the galaxy’s biggest chip on his shoulder
An alien warrior with anger management issues
A tomboy pilot who’s totally not into him, in case you were wondering

And Ty’s squad isn’t even his biggest problem—that’d be Aurora Jie-Lin O’Malley, the girl he’s just rescued from interdimensional space. Trapped in cryo-sleep for two centuries, Auri is a girl out of time and out of her depth. But she could be the catalyst that starts a war millions of years in the making, and Tyler’s squad of losers, discipline-cases and misfits might just be the last hope for the entire galaxy.

They’re not the heroes we deserve. They’re just the ones we could find. Nobody panic.